The Charity’s object is the provision of Almshouses for the benefit of Poor Men of Good Character unable to maintain themselves by their own exertions through age, ill-health or infirmity.

Over the past few years we have found it difficult to attract single gentlemen, so The Charity Commissioners therefore agreed an amendment to the scheme (by a further scheme dated 5th October 2001) which states the Almspeople shall be poor men, or failing that, poor women, who are unable to maintain themselves.

There are 49 bungalows/flats on the Charity’s Estate, plus a house which is occupied by the Wardens and their family. The estate is located in Church Lane, Romford – near the town centre.

The Charity of Roger Reede is registered with the Charity Commission and is a member of the National Association of Almshouses.

The Charity is administered by nine Trustees, and managed on a day-to-day basis by the Clerk to the Trustees and his assistant. The warden lives on site, acting as the first point of contact for residents.

As an Almshouse Charity residents occupy a property under licence, paying a weekly contribution for the maintenance of the properties. Any surplus income is invested to cover future repairs and refurbishment.

Residents who are eligible are able to claim Housing Benefit. Residents are also responsible for paying Council Tax and utility bills (electricity and telephone). A communal TV licence is paid for by the Charity.

The Charity is committed to an ongoing programme of improvements to the properties for the benefit of the residents, including the conversion of the bathrooms into walk-in showers.

The properties are located at Church Lane, Romford, RM1 4AS.

To qualify, the applicant must be:

Notices are sent out annually requesting applications for accommodation in the Almshouses. These are displayed throughout the Borough in Churches, Community Centres, Libraries and the Town Hall. Successful applicants are interviewed and placed on a short waiting list for a period of 12 months. After this period, the applicants who still remain on the waiting list will need to reapply and be reconsidered, along with all other applicants.

You can contact us by filling in the form below, or by emailing roger.reede@huntandhunt.co.uk or call us on 01708 577406 and speak to Margaret Grant on a Tuesday, Wednesday or Friday morning. Please address any postal enquiries to:

The ancient Charity of Roger Reede was founded at the time when the Wars of the Roses were drawing to a close. Many almshouse charities were founded during the reign of Elizabeth I, but Roger Reede’s began a hundred years before that. 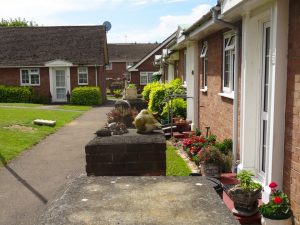 Roger Reede died in 1482, the year before Richard III came to the throne, and he was buried at the west end of St. Edwards Church, Romford. Little is known about him, but from his Will it seems that he owned two houses in Romford as well as several gardens and orchards and a number of mills. He also owned freehold and leasehold land in Dagenham and on the Essex marshes, and some woodland near Havering.

In his Will he directed that one of his houses known as Joy’s Mead or Hoocrofts should be a dwelling place for ‘five poor men of good character and standing’, who were to receive a pension of twenty six shillings a year together with benefits in kind. In return, the almsmen were required to pray regularly for Reede and his wife and friends, and one of them was appointed ruler to see that they did so and supervise them generally.

Apparently Reede’s widow continued to live in Joy’s Mead after his death and she helped to choose the almsmen and to rule them. While she was alive only four almsmen were chosen, but after her death the number was increased to five.

The original almshouse seems to have been in or attached to Reede’s own house. Reede left property amounting to more than 140 acres and several tenements as an endowment for the Charity. So far as it is known, the Charity has always maintained almshouses in Romford and provided benefits for the almspeople and other poor people in the district. From its foundation the Charity has had close connections with the ancient ecclesiastical parishes of Romford, Hornchurch and Dagenham, which originally extended into Ilford. 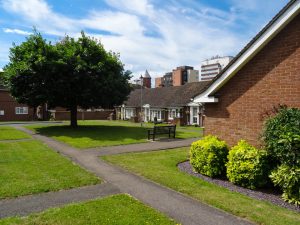 During the early part of this century the income from the endowment was more than enough to maintain the existing buildings and the almsmen, and a substantial sum by way of surplus income was accumulated. At that time the Charity’s Almshouses were in North Street, Romford, where they had been for many years. There were then six almshouses built in 1785 and rebuilt in 1896, but in addition the Charity owned other property in North Street adjoining the almshouses which later proved to be very valuable. As early as 1928 the Trustees were considering ways of using the surplus income, and proposals for building additional almshouses were discussed.

Before anything could be done, it was necessary to agree a new scheme with the Charity Commissioner and this was eventually achieved in April 1940.

Unfortunately developments were then seriously delayed by the War and by the building restrictions which continued for some years afterwards. In 1959 however, the whole of the Charity’s property in North Street was sold by tender and fetched a substantial sum.

With this money the Trustees built nineteen new houses at the north end of Redyn Field in Church Lane, Romford, on land originally left to the Charity by Roger Reede and owned by it even since. The almshouses were built to a high standard and proved to be a great success. 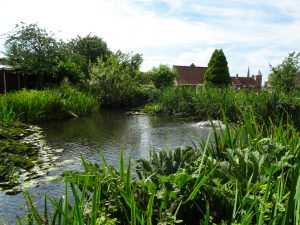 Subsequently the remainder of the Trustees’ land has been developed with both bungalows and two storey flats, designed in harmony with the earlier development. The site is attractively laid out in its own gardens maintained by the Charity.

There are now some fifty units, both single and double, including a house for the resident Warden.

The Trustees of the Charity have continuously improved the almshouses to incorporate all modern amenities. For example, an alarm system has been installed throughout the development and a guest room has been built for emergency use by visitors and to help almspersons to maintain contact with distant relatives. In addition, the Trustees have embarked on a programme of renovating the first nineteen units as they fall vacant.

The fifth centenary of the Charity was marked in 1983 by a reception attended by the Bishop of Chelmsford and the Mayor of Havering, as well as the almspersons themselves. This was followed by a service in St. Edwards Church where a memorial to Roger Reede (replacing another destroyed in a fire last century) was unveiled.

The Charity of Roger Reede

This website uses cookies to improve your experience while you navigate through the website. Out of these, the cookies that are categorized as necessary are stored on your browser as they are essential for the working of basic functionalities of the website. We also use third-party cookies that help us analyze and understand how you use this website. These cookies will be stored in your browser only with your consent. You also have the option to opt-out of these cookies. But opting out of some of these cookies may affect your browsing experience.
Necessary Always Enabled

Any cookies that may not be particularly necessary for the website to function and is used specifically to collect user personal data via analytics, ads, other embedded contents are termed as non-necessary cookies. It is mandatory to procure user consent prior to running these cookies on your website.